Study trip to Brussels held from 16th to 19th of May and gathered 24 participants from all partners countries in order to allow participants to get acquainted with each other and the context of neighbouring Western Balkan countries.

This visit also included more content-related meetings on specific topics such as digital education, entrepreneurship and youth support, and the geographical focus on WB region.

First programme meeting was a roundtable event “Digital in education” hosted by MEP by Victor Negrescu in the European Parliament. Attending this event aimed to illustrate the work of the European Parliament on key topics, where Junior Achievement can play a role in bridging the world of education with the world of work. JA Europe CEO Salvatore Nigro was a speaker at the event, and the hosting MEP put several time emphasis on the Western Balkans region and several study trip participants took the floor to share their insights.

Second day of study visit participants had meeting with DG NEAR, European Commission to discuss ByLeap project and future prospects of funding for youth entrepreneurship in the Western Balkans. Salvatore Nigro (CEO JA Europe) and Darko Radicanin (CEO JA Serbia) presented the activities of Junior Achievement (JA) in Europe and current status of the ByLeap project.

The discussion continued further when Blerina Guga (CEO Junior Achievement Albania) stressed the need to show that the Western Balkans region has more opportunities than problems, in order to give hope to the young people. Brain drain has been identified as the biggest problem linked to young people in Bosnia and Herzegovina and North Macedonia, and participants from Montenegro pointed out the need for closer cooperation between the EU institutions and those of the Western Balkans. 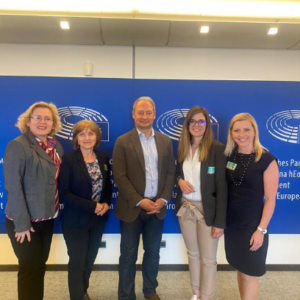 After discussion with DG NEAR participants had meeting with MEP Andreas Schieder, Chair of the Delegation to the EU-North Macedonia Joint Parliamentary Committee. The purpose of the meeting was to introduce the ByLeap project as well as the youth entrepreneurship stakeholders of North Macedonia to the European Parliament’s relevant stakeholders. In addition, the political context of future prospects of EU membership negotiations were discussed.

MEP Schieder outlined his plans for a European Parliament delegation visit to Skopje at the end of June 2022. Later this year, another visit is planned by the Socialist Group MEPs of the European Parliament. JA North Macedonia called for a sustainable model for educational reforms and the importance to integrate entrepreneurship education into the formal education at high school. 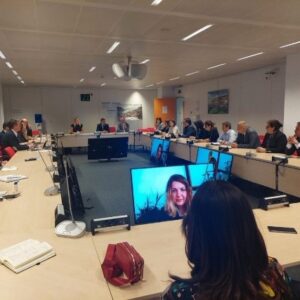